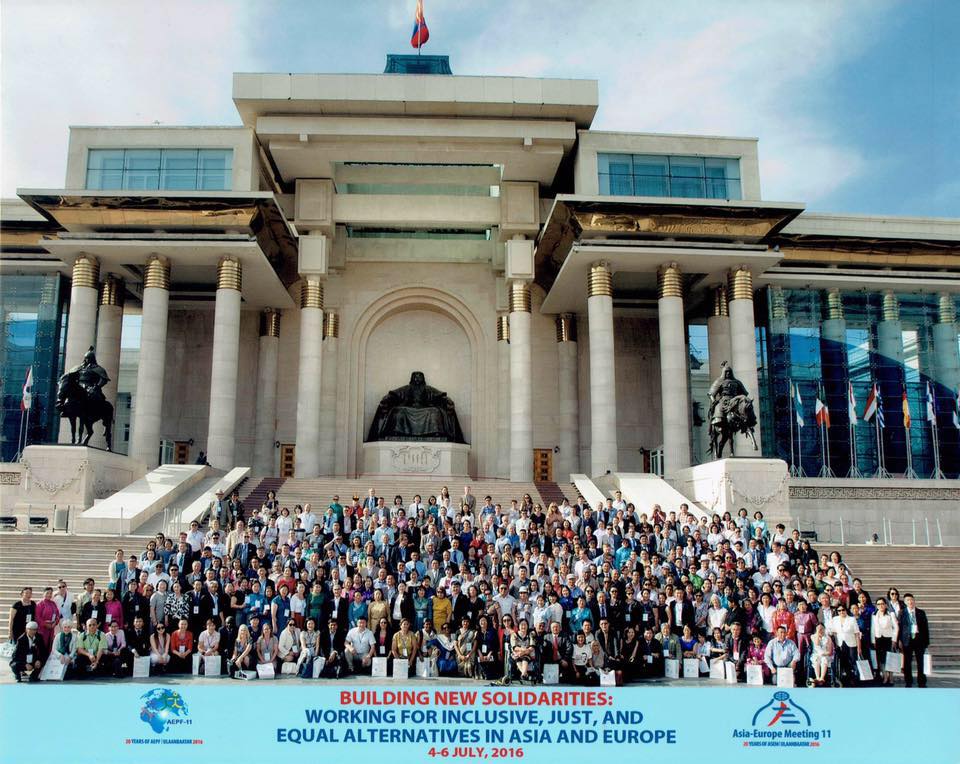 The AEPF has been advocating for a more transparent and accountable ASEM process since 1998 and the development and adoption of our first People’s Vision.

For the first time the Asia Europe People’s Forum was invited to formally present our Final Declaration to ASEM itself.

The Asia Europe Forum made two addresses to ASEM10, by Luciana Castellina, the Honorary President of the Associazione Ricreativa Culturale Italiana(ARCI) and Rex Varona of The Migrant Workers’ Forum.   The main points they based their presentations on are found below.  They were accompanied by Tina Ebro of the AEPF IOC and the Institute of Popular Democracy, The Philippines and Andy Rutherford of the AEPF IOC and Fresh Eyes – People to People Travel, UK.

At the end of their addresses they formally presented the agreed Final Declaration of AEPF10 to Herman van Rompuy as Chair of ASEM10.  They also formally presented a petition signed by many of the participants at AEPF10 on Sombath Somphone.

His petition reminded all ASEM member states of their human rights obligations, both domestically and internationally, demanded that the Lao Government complete their investigation into Sombath’s disappearance, make public the investigation report, and take forward the legal process against the perpetrators of the crime.  It also urged ASEM member states to monitor the fulfilment of these demands and ensure that Sombath and his family receive justice and that he is returned safely to them.

The main points of the presentations of the addresses to ASEM10, by Luciana Castellina, the Honorary President of the Associazione Ricreativa Culturale Italiana (ARCI) and Rex Varona of The Migrant Workers’ Forum.

We are proud to share with you the Final Declaration of the Asia Europe People’s Forum 10.

Over 400 representatives from community organisations, social movements and Trade Unions from 42 countries have a strong consensus that the dominant development approach over the last decades - based around the deregulation of markets, the increasing power of multinational corporations, and of unaccountable multilateral institutions and trade liberalisation - has failed in its aims to meet the needs and rights of all citizens, creating the conditions for poverty, inequality, environmental devastation and growing social unrest.

The powers of transnational corporations have become even more entrenched as ‘corporate capture’ of governance and policy processes spreads to more political arenas, giving business significant control over our lives and livelihoods.

Despite the policy failures of trade liberalisation, market and financial deregulation and the privatisation of essential services and common goods, our governments continue to ignore the growing tangible consensus for fundamental policy changes.

There is a deep felt need and demand for change and for new people-centred policies and practices.

We call on ASEM member governments to work together to adopt an alternative approach.  At the AEPF10 we reaffirmed our commitment to call on ASEM to work with urgency to replace the current trade and investment regime with the Alternative Trade Mandate.

This is built on an open and democratic trade policy-making process, developing legally binding measures, which enable re-localising economies, protecting small-scale farmers, promoting food-sovereignty, public services and social protection and which put the fulfilling of international human rights law as well as social and environmental justice above any trade and investment rules.

Linked to this, across Asia and Europe, civil society groups and social movements are urgently demanding for transformative social protection systems with the goal of guaranteeing a life of dignity for all.

We sincerely call on ASEM governments to work together to implement social protection systems that are universal, comprehensive, rights-based, state-driven, legislated, and with mechanisms for public participation and control.

On December 15 2014, it will be two years since the enforced disappearance of Sombath Somphone in Laos.

Sombath was one of the main organisers of AEPF9 held in Vientiane just before ASEM9.  Sombath, a Magsaysay Award winner, is one of the most respected people in ASEAN working for sustainable development.

We remind all ASEM member states of their human rights obligations, both domestically and internationally. We urge ASEM member states, especially Malaysia as the forthcoming Chair of ASEAN, to ensure that Sombath and his family receive justice and that he is returned safely to them.

The AEPF10 strongly condemns the military coup d'état and the establishment of a military government in Thailand. We are especially concerned about human rights violations, arrests and interrogations, as well as the increased censorship and intimidation of citizens.

Our Forum highlighted the strong thematic links that form our call for a more Just and Inclusive Asia and Europe. In addition to our calls for an Alternative Trade Mandate and for ASEM governments to work together to implement social protection systems that are universal, comprehensive, rights-based, state-driven and legislated, we would like to highlight three areas.

For the last two decades, global initiatives have been unsuccessful in controlling greenhouse gas emissions that are causing climate change. There is a clear need for a fundamental change in relationship between people and nature. People are part of nature; we don’t own nature.   It is essential that we move away from the extractive, fossil-fuel based, exploitative economic approach and towards people-centred, sustainable economic and social systems.  We call on ASEM governments to work together to shift the systems of production and consumption from ones based on the continuous expansion and appropriation of nature to more sustainable and environment-friendly ones. Ones which fulfil the needs of people, not corporations.

Second the clear need for all ASEM governments to significantly decrease military spending and allocate the ‘released funds’ to social services as a way to build peace upon justice.

We call on ASEM to develop, as a matter of urgency, a special Common Plan with member states to cut military spending by at least 10% over the next 5 years.

Third an “Inclusive and Just” Asia and Europe means ALL people, regardless of nationality and status, being recognized and respected, being equally treated, enjoying the same basic human and labour rights.

Human security, social protection, decent work and life apply to all people, particularly the more vulnerable sections of society including migrants, women, people in the informal sector, people with disabilities and people in the rural sector.

Trade unions have the role and responsibility to organize and unionize all workers, including migrant and the informal sectors, and we urge ASEM member governments to enable this.

Criminalization and violence against migrants in Asia and Europe must be stopped, including the most recent “joint operation” of the EU called “Mos Maiorum”; this echoes previous crackdowns and unjust mass detentions of thousands of undocumented migrants.

We urge you to read our full Final Declaration and integrate our recommendations into your future vision and practice.