In November, our new weekly lecture series on climate controversies in Southeast Asia will start. Every week we will discuss with a guest about climate justice, climate change, disasters, energy policy, climate protection projects or the effects of large-scale projects in countries of the Southeast Asian region. A joint series with the Department of Southeast Asian Studies at the University of Bonn and other cooperation partners. 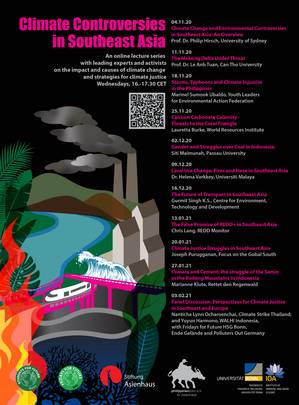 Every Wednesday at 4 pm a different guest will discuss a topic related to South East Asia.

Southeast Asia, with tens of thousands of islands, long coasts and cities in low-lying deltas, is particularly threatened by climate change. Weather changes, storms and typhoons are already causing immense damage and numerous fatalities. Future scenarios predict that large cities like Bangkok, Jakarta or Ho Chi Minh City will be under water.

The complex ecosystems of the Coral Triangle - home to the world's greatest marine biodiversity - are likely to die due to water warming and acidification. The livelihoods of millions of people who live from fishing or tourism depend on them.

The historical responsibility for global warming, which threatens the future of the people of South East Asia, lies with Europe and North America. At the same time, the governments of the countries of Southeast Asia are forcing a development based on accelerated growth and exploitation of natural resources - thus exacerbating the climate crisis.

In the series of lectures, experts and activists will analyse the effects of climate change on the region, discuss the socio-ecological transformation of important sectors (such as energy, agriculture or mobility) and debate the challenges and strategies of the climate justice movement.

There are 11 dates, the series starts in early November and ends in early February.

The lectures take place every Wednesday afternoon from 4pm to 5.30pm.

The series of lectures will take place as an active discussion via Zoom and will be broadcasted live on Facebook on Wednesdays from 4pm to 5.30pm CET.