Join us for a live panel discussion in our third joint online event on the current situation in Myanmar, hosted by the Dept. of Southeast Asian Studies at Univ. of Bonn, the Myanmar-Institut, and the Foundation Asienhaus. 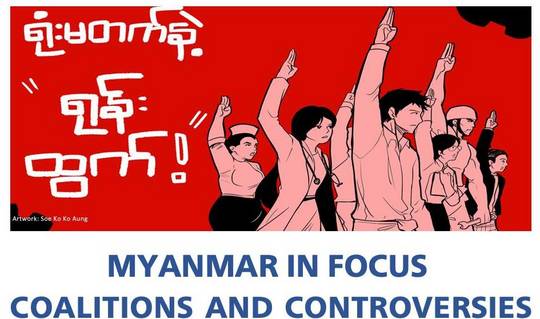 The 4 months since the coup d'état have been full of violent and cynical acts by the military rulers against the people. The situation in Myanmar is becoming increasingly difficult: The protests are ongoing while bomb-blasts and economic hardship shake the wider population. While some of the ethnic armed organisations are cooperating, others are engaged in intensifying clashes with the Tatmadaw. This results in drastically growing numbers of displaced people and refugees. In the complexity and diversity of the common struggle, actors could soon face further controversies and political imponderables.

The formation of the National Unity Government (NUG) and the People’s Defence Force (PDF) raise expectations of meaningful federal democratic leadership and international recognition. At the same time, the NUG finds itself caught between incommensurable demands. The ardently hoped-for material as well as political support from the international community is unfortunately still lacking, be it out of apathy or inability.
The people, however, will likely experience even greater hardship and suffering.
In this session of “Myanmar in Focus”, we will discuss the current developments in Myanmar regarding emergent political fault-lines and societal possibilities.