The Stiftung Asienhaus welcomed many people to the conference on mining and Indigenous rights in Kalimantan. Our three guests participated to a series of events from Freiburg to Aachen, and stopped in Cologne, in order to raise their voices.

The event welcomed three guests from Kalimantan (Indonesia) and was moderated by Kristina Großmann, from the University of Passau

The whole event was moderated and translated by Kristina Großmann, from the University of Passau. The first speaker, Luthfi Bakhiar (Friend of the Earth Indonesia – WALHI), discussed the topic of Coal mining, environment and local communities in Central Kalimantan.

After a short introduction into the third biggest island worldwide, he explained 78% of the country land is licensed for the exploitation of coal, oil palm or logging. The raw materials are  exported, so that the local people do benefit from them. The speaker focused on the exploitation of mining, and especially on the project of the Adaro Company. The latter is the largest company in Indonesia, and seeks to become the biggest worldwide. The company is planning to build a railway to facilitate the transport of coal throughout the island. However, the local people will not be aloud to use these transport facilities: it will only serve the transport of coal.

The consequences of coal mining are disastrous: not only the nature suffer from it, in form of deforestation, land grabbing, poisoning of rivers, but also the villages and inhabitants directly are affected by it. Indeed, Luthfi explained that some conflicts between and in the communities do emerge. The number of demonstrations and local movements is growing and local people call for the stopping of the Adaro Metcoal Project. 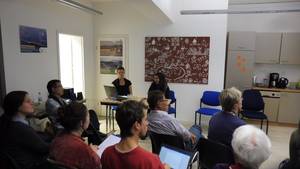 Our second guest, Meta Septalisa (Friends of the Earth Indonesia – WALHI), reported about a specific project in Kalimantan she is involved in. After showing the audience a short film, Conscience, she shared her experience with the Gunu Garasi Women. Most of the local people in the villages do not know about their rights and they have to face coal mining companies and the police.

The project she is leading aims at informing the people and assisting them with the legal procedures. In order to be more efficient, the local people are trained to speak out and defend their rights in small groups. The major complains arising from the village is the lack of clean water, so as the noise coming with the trucks activities. As Meta was asked about her own safety, she smiled and explained that the people from the villages were ready to help her.

Right of Indigenous Peoples are not respected

The last lecture dealt with the topic of indigenous people’s rights. Marko Mahin (Lambaga Studi Dayak 21) explained it was current that local people’s rights were violated. Indeed, the government often neglects the protected areas and sells land to coal mining companies. The population need to come together and draw maps or come with evidences in order to claim their rights and reach the local instances. However, the lack of information and the lack of organization are often a barrier for them to achieve their goals.

This is why some civil society organizations support local people with the defending of their land by informing them about their rights, helping them with the making of cases and the collecting of data based evidences. The discussion that followed the presentation was very rich. Regarding the law, Marko explained that a national law for the protection of land does exist, but that the local/national authorities are not really committed to comply with the law.

The three speakers want to raise awareness regarding the topic of conservation of biodiversity and the protection of indigenous rights in Indonesia. They hope that the international community will not forget Kalimantan and that everyone will take its responsibilities.