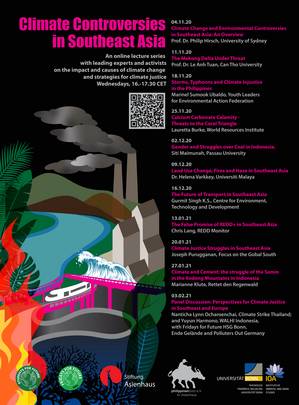 Southeast Asia, with its tens of thousands of islands, long coasts and cities located in low-lying deltas, is particularly threatened by climate change. Weather changes, storms and typhoons are already causing immense damage and numerous deaths. Future scenarios predict that large cities such as Bangkok, Jakarta or Ho Chi Minh City will be under water. The complex ecosystems of the Coral Triangle - home to the greatest marine biodiversity of the world - are likely to die due to warming and acidification of the water. The livelihoods of millions of people who live from fishing or tourism depend on them.

The historical responsibility for global warming, which threatens the future of people in Southeast Asia, lies with Europe and North America. At the same time, the governments of the countries of Southeast Asia are forcing a development based on accelerated growth and exploitation of natural resources – thereby exacerbating the climate crisis. In this lecture series, experts and activists from and on Southeast Asia will analyse the effects of climate change on the region, debate the socio-ecological transformation of important sectors (such as energy, agriculture or mobility) and discuss the challenges and strategies of the climate justice movement.

In this first part of the lecture series Professor Philip Hirsch, prof. em. University of Sydney, gives an overview of the topic in the region, including the discursive treatment of climate change and the entanglement with other issues.

The Mekong Delta under Threat

This week's lecture is by Professor Le Anh Tuan from Can Tho University. He'll talk about the importance of the Mekong Delta for the region and sketch out current and future effects of climate change on this important eco-system.

Storms, Typhoons and Climate Injustice in the Philippines

This week, Marinel Sumook Ubaldo, a youth activist from the Philippines, speaks about how witnessing the destructiveness of Super Typhoon Haiyan led her to becoming an international climate activist, lobbying international organisations to address climate change.

Gender and Struggles over Coal in Indonesia

This week we are joined by student activist Siti Maimunah, doctoral candidate at the university of Passau, to tell us about extractive practices in Indonesia and the problems they cause.

Land Use Change, Fires and Haze

This week we are joined by Dr. Helena Varkkey from the Department of International and Strategic Studies, University of Malaya. She will speak on types of land, Land Use Change and the attendant risks.

The Future of Transport in Southeast Asia

Gurmit Singh KS, Chairperson of the Centre for Environment, Technology and Development, engineer and social activist, joins us to discuss transportation, climate change and approaches to urban density.

The False Promise of REDD+

This week we are joined by Chris Lang, writer, activist and forestry expert. He'll talk about the problems in the REDD+ approach to sustainability.

This week Joseph Purugganan, activist and coordinaor at Focus on the Global South talks about the intersecting struggles for climate justice from a regional perspective.

The Struggle of the Samin in the Kedeng Mountains in Indonesia

Mariane Klute, member of Rettet den Regenwald (Save the Rainforest) talks about extractive industries in Indonesia, the impact on local populations and german industry's complicity.

Perspectives for Climate Justice in Southeast Asia and Europe

In our final session, we host a panel discussion between climate activists in Europe and Asia. Moderated by Yassin, Lara and Malin, the panel will host Lynn (Fridays for Future Bonn), Mina (Ende Gelände), Lynn (Climate Strike Thailand) and Yuyun (Walhi).

'Climate Controversies' was organised by the Department of Southeast Asian Studies at the University of Bonn in cooperation with Fridays for Future (HSG Bonn and FFF Cologne), the AG Ressourcen of Stiftung Asienhaus and the philippinenbüro.