The China discourse has long been controversial, not just since the outbreak of COVID-19. However, with the deterioration of the US-China as well as EU-China relationship, a polarisation increasingly deprives those involved in cooperation work with the People's Republic of China of their work language. Currently, the discourse categorises positions on China into (critical, realistic, value-loyal) ‘hawks’ and (uncritical, naive, opportunistic) ‘doves’. Other opinions in between, far from both poles, are no longer intended. We would like to counter this dichotomy – from the perspective of the civil society cooperation work of the China Programme – with a critique of the discourse. 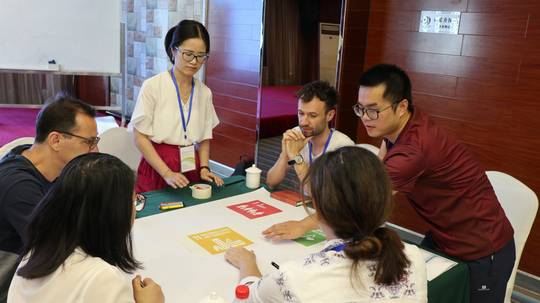 In her guest commentary for DIE ZEIT on 2 May 2020, Kristin Shi-Kupfer, Research Director of Politics and Society and the MERICS Labs in Berlin, sharply criticises so-called ‘China-Versteher’[1]. She reasons that among them are ‘politicians, entrepreneurs, scientists, doctors, journalists and China experts’, who generally denounce China critics as ‘racists and agitators’. These ‘China-Versteher’ disregard the many voices in Chinese society critical of their own government.

The sinologist and political scientist particularly rejects the depiction of China critics in Susan Arndt's article in the taz of 21 April 2020. ‘A Critique of the critique’ of China supports the efforts of the government in Beijing to establish its own narrative of the COVID-19 pandemic. Shi-Kupfer concludes that ‘China-Versteher’ subvert necessary criticism of Beijing and thus make ‘everything worse.’

Shi-Kupfer's use of the word ‘China-Versteher’ illustrates the linguistic minefield the discourse on our relations with the People's Republic has become. In the past, we ourselves have been labelled in this way, however, in the sense of being communicators, practitioners, who open up spaces of cooperation with China. In this sense, we propose to translate the German term with ‘China decoders’ in English.

The China Programme is engaged in the dialogue and cooperation sphere between China and Europe. From 2012/13 to 2019/20, it implemented an exchange programme for civil society organisations, the EU-China NGO Twinning Programme. The programme gave European organisations rare access to Chinese civil society, which is almost invisible in the media. The programme focused on the topics of climate change, and social and environmental justice. Every year the programme proved that cross-system dialogue on common issues is not only constructive but also necessary.

People, who engage in dialogue and cooperation work with China are a heterogeneous group. They sometimes understand ‘China’ in completely different ways. Among them are uncritical, covert and openly critical voices. What they all have in common is that they very consciously decide what, how and where they communicate. In order to overcome state control mechanisms and to open up spaces for cooperation and the exchange of personal opinions, as well as to protect partners, they often put their personal opinion behind in the first place. At the same time, we can claim that all our cooperation partners, including those in China, are aware of the fact that we reject a one-party dictatorship and condemn the human rights situation in the country.

We resolutely oppose a generalisation of cooperation work as uncritical appeasement, an instrumentalisation of our work for a ‘differentiated’ view of China and the ‘either/or narrative’ in a polarised discourse. From our point of view, Shi-Kupfer's position against a generalised ‘critique of the critique’ of China is only partially helpful. She generalises dialogue and cooperation work, too, sometimes using the stylistic device of polemics. We therefore supplement her position with three perspectives from our practical work with civil society organisations in China.

Creating spaces for cooperation does not mean protecting the Chinese government. Colleagues and partners in our field of work all know well what the difference between a democracy and a dictatorship is. People in dialogue and cooperation work constantly reflect on what format can and may still be constructively pursued. Certainly, critical voices from China should be strengthened. However, if we want to understand these voices in their context, we need a dialogue on the ground in China. To this end, we must adhere to the state structures for international cooperation. Consequently, cooperation work includes cooperation with the Chinese state. Otherwise, civil society dialogue would not be possible at all due to the legal situation.

Creating spaces for cooperation does not mean being cowardly and not calling unpleasant truths by their names. Communicators serve on a multitude of levels. They help to encode shared contents and to decode what is conveyed in return from China. Different things are being said on different levels: from the grand stages, which offer little room for depth and concrete things, to closed meetings and personal conversations, where more can be said than most people think. European participants in our exchange programme often know little about China's civil society structures. Chinese organisations are usually denied a constructive influence. They are merely considered recipients of instructions from the government. In direct dialogue and in the context of personal trust, it quickly becomes clear how heterogeneous social and political issues are perceived, discussed and dealt with.

Creating spaces for cooperation does not mean denying the existence of universal human rights. People involved in dialogue and cooperation work are aware of the ambivalence of their activities. Many are internally divided because of their personal experiences in the country, not in counter-party and pro-population or counter-China and pro-US camps. Their opinions are refined on the basis of their encounters with Chinese people. As communicators, they work with and within structures that are determined at the political level. Certainly, they perpetuate these structures through their work, but they also make it possible to change them. In this way, we were able to introduce our exchange programme participants to sensitive ‘taboo topics’ such as workers' rights, gender issues and HIV/AIDS and to reach an understanding of how to work on them in China.

People, who are engaged in dialogue and cooperation work with China, who are neither ‘hawks’ nor ‘doves’ can very well be a constructive element in a reorganisation of our relations with the People's Republic of China. Their work in no way implies their tacit approval of or active support for the Chinese government. However, it is a fact that their work is less visible. This may be a choice of their own, but it may also be a result of the fact that the ‘in between’ is of little interest in the current discourse on China. The German version of this text was submitted to DIE ZEIT and the taz. Now it can be read here as a self-publication.

[1] Note of the authors: ‘China-Versteher’ may signify people, who ‘understand’, German verstehen, something about China or who generate ‘understanding’ for Chinese positions.

Back to first paragraph