In 2018, our Twinners surprised us not only with the multitude of topics they worked on, but especially with the amount of side projects and cross-pairing cooperation. Adding into account that the Twinning Alumni Network (TAN) was offi cially initiated during a meeting in Hong Kong leading to unexpected synergies, we have more evidence than ever for the sustainability of the EU-China NGO Twinning Program. Following the implementation of the rigorous law for the regulation of international NGOs in January 2017, the perseverance of the program shows the high-level effi ciency of a multiple-actor run transnational cooperation. 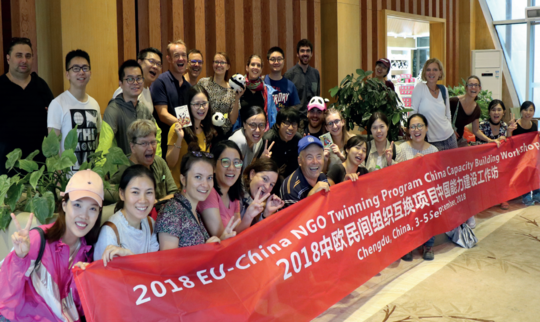 Supported by the Robert Bosch Stiftung and Stiftung Mercator, the Stiftung Asienhaus realized its sixth round of the EU-China NGO Twinning exchange program in 2018, laying the foundation for a vital and sustainable connection between China’s and Europe’s NGOs. Chinese and European NGOs working on very diverse topics of civil society took part in the mutual exchange which foresaw a several week long work-and-study stage at the partner organization in the respective other region.