Cologne, 30th April 2020 - Early this morning, activist and Bayan Muna coordinator Jory Porquia was brutally killed by four unidentified armed men inside his home in Iloilo City. The philippinenbüro expresses its shock about Jory’s killing and calls on the authorities to bring his perpetrators to justice. 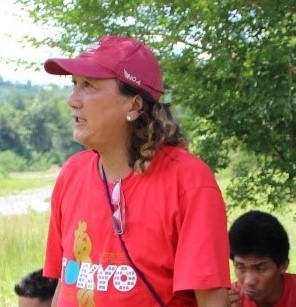 For decades Jory committed himself to work for better living conditions of the marginalized sectors in society. Creatively, he looked for ways how to help and improve the situation at hand. Lately, he had engaged in relief distributions to urban poor communities to uplift their situation during the Corona Pandemic and Lockdown. But instead of welcoming the support, the Philippine National Police (PNP) harassed him and claimed the delivered food was infectious.

As activist, he had survived Martial Law during the Marcos dictatorship. Once himself a migrant worker, he continued to work for the rights of Oversea Filipino Workers (OFW) in the Philippines and became vocal against environmental destruction, such as mining.

In 2018 and 2019, his picture was publicly posted along with other activists who were vilified as alleged members of the New People’s Army (NPA). Still, Jory and his fellow activists did not back down in the face of red-baiting and repression.

The philippinenbüro expresses its shock about Jory’s killing and calls on the authorities to bring his perpetrators to justice. Impunity has seen too many activists’ life taken and continues to enable more killings. Impunity must end!

Jory’s death is a great loss for his family, those who worked with him and those he served. His dedication and perseverance remain an encouragement to continue fighting for human rights and social justice!