The words “Social Credit System” have been ghosting through Western media ever since the Chinese government published its planning outline for establishing the system’s framework in the short time between 2014 and 2020. The author Joanna Klabisch provides an analysis of the topic and discusses the origins so as the consequences of this rating system. 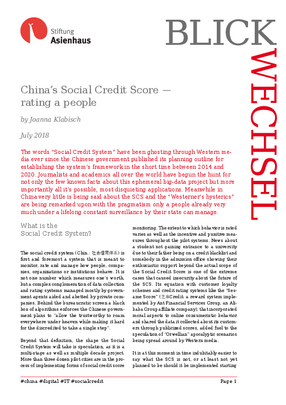 Journalists and academics all over the world have begun the hunt for not only the few known facts about this ephemeral big-data project but more importantly all it’s possible, most disquieting applications. Meanwhile in China very little is being said about the SCS and the “Westerner’s hysterics” are being remarked upon with the pragmatism only a people already very much under a lifelong constant surveillance by their state can manage.