The Asian Infrastructure Investment Bank (AIIB), first proposed by China in October 2013, opened for business in January 2016. The AIIB is not only a bank it is also part of the new "assertive" foreign policy line. 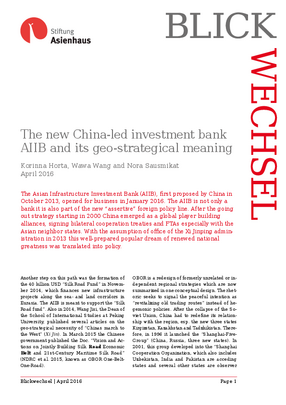 After the going out strategy starting in 2000 China emerged as a global player building alliances, signing bilateral cooperation treaties and FTAs especially with the Asian neighbor states. With the assumption of office of the Xi Jinping administration in 2013 this well-prepared popular dream of renewed nation greatness was translated into policy. The authors discuss its genesis, geostrategic implications and the German role for environmental and social standards.