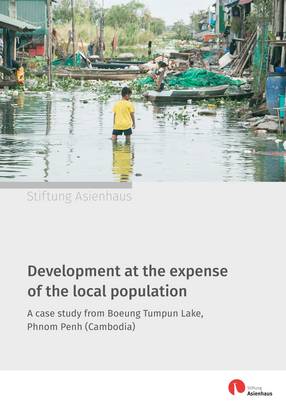 The report aims to determine the impact that development is having on Boeung Tompun Lake residents’ living standards and to highlight their concerns for the future. (Photo credit: © Stiftung Asienhaus)

There is a huge lack of transparency around this development that comes at the expense of the people living in this area. The development is connected to human rights violations (e.g. lack of rule of law, child labour, forced eviction) and thus repeats the same mistakes that were previously made with the development of the Boeung Kak Lake area in the north of Phnom Penh. Until today the investor (ING Holding) failed to properly address requests for information from NGOs and local population.

Boeung Tompun is one of the largest natural lakes in Phnom Penh. The lake is situated in the Meanchey district approximately seven kilometres south of central Phnom Penh. This location offers families affordable housing close to the city centre, where employment and education opportunities are typically greater than in Cambodia’s rural locations.

The Boeung Tompun Lake area is roughly 2,600 hectares in size, which includes 520 hectares of surface water that is used by local people for fishing and growing aquatic crops such as morning glory (water spinach) to be sold at markets. It is home to thousands of families, who have been settling in the area since 1975, and approximately 5,363 households in 13 target communities used in this study. Residents have built homes from wood, brick, and concrete, on the banks of the lake or positioned on stilts above the water.

As the area is home to many people and the impact of development in the area will likely affect them, this report has sought to conduct further research into the broader implications of the Boeung Tompun Lake development. The findings are that the lake area has a continued importance to both people and the environment.