The philippinenbüro e.V. salutes Inday Espina Varona and Maria Ressa for their courage and principled reporting in times of fake news and strong polarization!

First on November 8, Filipino journalist Inday Espina Varona won the Reporters Without Borders' (RSF) Prize for Independence at the 2018 Press Freedom Awards. Inday Espina Varona founded a social media women's rights campaign in response to President Rodrigo Duterte's comments on women. She is a veteran journalist who has reported on many sensitive issues such as violence against women, child prostitution, LGBTIQ and the Moro Islamic Liberation Front in Mindanao.

On November 21, Maria Ressa, Rappler CEO and Executive Editor was awarded the Gwen Ifill Press Freedom Award from the Committee to Protect Journalists (CPJ). The prize comes at a time were Ressa’s online media outlet is being attacked by no less than President Rodrigo Duterte himself and Ressa is being threatened with 10 years in prison for alleged tax evasion in an attempt to silence independent and critical reporting. Deeply moved by the awarding, Ressa stated in her speech: We need to continue reporting without fear or favor. And we "need to be truthful, not neutral." 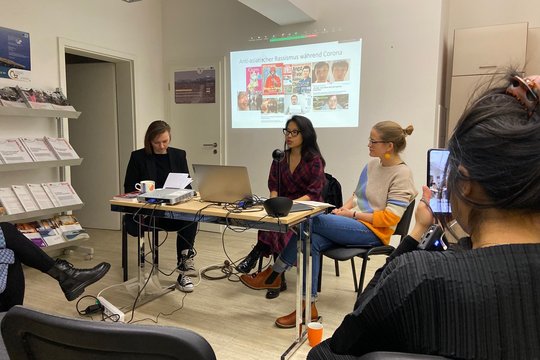